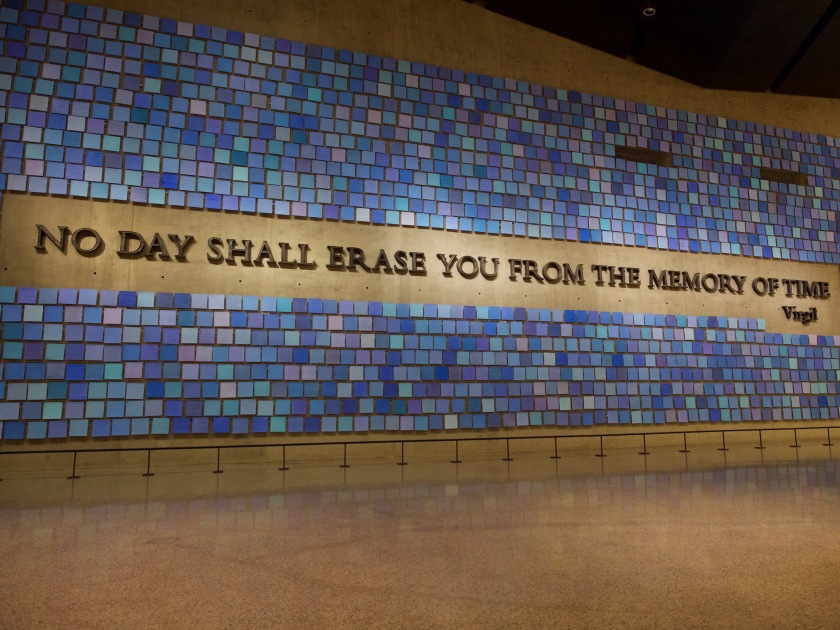 On the west coast, we were attempting to reign in a school morning. Controlled chaos. My husband turned on the TV. He needed to know what the traffic was going to be on 680 and 24. The local news had been pre-empted by the network. They were showing footage of a plane flying into one of the Twin Towers in New York. I remember gasping in horror, the thought of the souls on the plane and in the building and the debris that might be falling to the streets below…we thought it was some freakish accident.

And then we were stopped in our tracks as we watched in stunned silence – live – the second plane flying into the second tower, and then the utter hideousness of two sky-scraping monoliths crumbling to the ground.

This was no accident. And we could not turn away from the images.

My husband, my son Julian, and I huddled together on the blue sectional sofa in the family room, not understanding what we were seeing, trying to comfort Julian through our own tears, trying to explain something to him that made no sense whatsoever to us. Were we under attack? What was happening? Who was next?

I remember thinking, “History is happening.” For my son’s generation, it would come to have similar significance as JFK’s assassination had for mine. It was a day when the country lost its innocence, and when a sharp line was drawn for all of us between the stuff that mattered, that required our attention, that deserved our time…and the stuff that didn’t. Priorities came into sharp focus.

My mother and sisters lived and worked in New York City, and on the morning of 9/11 my first thought was for family, for the ties that bind, for the way we have always had each other’s backs. I thought of my little nuclear family gathered with me on our blue sofa: my husband and son, how precious they were to me and how I should have their backs, Julian’s certainly, but my husband’s too. He was my family too.

A part of me wished my thoughts could have stopped there.

My next thought was: “Life is short; it could all be over in the blink of an eye.” And I knew that I didn’t want to waste any more time not sharing my life with the woman I had loved for over a year. I realized I was going to have to gather the courage to do the unthinkable: leave my husband of thirteen years to be with her.

I prayed it would not take down my son in the process. Perhaps my husband and I could conduct the end of our marriage in an adult and civilized manner, keeping Julian’s needs front and center to guide our care of him and our treatment of each other. We’d both watched many of our peers go for each other’s jugulars during their divorces. When we were the outsiders looking in we had deigned to judge, commenting to each other about the toll on the children. I knew – at least I hoped – we could be and do better than that.

The country was in mourning. We were lucky though. Our loved ones back east were all safe and unharmed, although as the days passed, we heard from family and friends who knew people who had perished. I spoke with my lover briefly that day, to let her know that everyone I knew was safe, and that, yes, more than ever, I loved her and wanted to make a life with her. At that moment I didn’t know how, but I was certain the “how” wasn’t going to stop us.

In the meantime, I was still married. My husband and I fell into bed that night exhausted from the stress and worry of the day’s events, and with an unspoken fear: there was no telling whether there would be new targets that night or the following day or in the weeks ahead. Perhaps the west coast would be hit next – San Francisco and its beautiful bridges. Some of the country’s crown jewels. It wasn’t too far-fetched. We held hands that night. For the time being, he and I still had each other to lean on. And in light of what seemed to be an imminent apocalypse, we needed each other.

The world was clearly embarked on an altered path.