I used to have a problem with rose-colored glasses. To begin with, they weren’t even my glasses. They were Barbara’s. And, so help me God, she looked through them all. the. time. No matter what befell her – or others – those glasses never failed to afford her a view of the silver lining. You could deliver the worst news imaginable, and she’d manage to find a way to spin it into something positive. Between you and me, it was annoying as hell. I wanted to get in her face, like Cher did with Nicholas Cage in “Moonstruck,” and yell, “Snap out of it!” I wanted her to face reality, and accept that when the shit hits the fan, no amount of candy coating can eliminate the stench.

Life had already taught me that the proverbial “other shoe” inevitably drops. It was simply a matter of time. And once it crashed loudly to the floor, I could smugly pat myself on the back and say, “I knew that was going to happen!” Proving not only that I was right, but that I could foresee the future! My vision was clear and unencumbered by “good news” eye-wear. I felt superior to my vision-impaired friend.

I often wondered what Barbara would do, how she’d react if something cataclysmic ever happened to her. Would those glasses help? Would the rose-colored view facilitate her healing and realignment with the Universe? Or would the whiplash of tragedy or horror knock those glasses off her face forever? Not that I was wishing for something like that to happen. I was just curious.

Sometimes, when we sit with such questions, even if we are not consciously expecting replies, even if they are mere background noise in our brains, the answers have a way of pushing forth.

In this case, my son Julian died. Suicide. It was Barbara, who was on the scene when I got the news. Literally holding me up, somehow containing me so that I wouldn’t shatter into a million pieces, so that my soul would not spill out of me onto the floor, out the door, into the neighborhood and beyond. Where I might not ever be able to retrieve it.

Well-meaning people offered me infuriating platitudes:  “He’s in a better place,” or “He’s finally at peace.” She never did. She never offered me her rose-colored glasses. Not one word about the possibility of a positive perspective from behind them. She was simply with me and “the full catastrophe.” I didn’t know she had it in her.

A part of me wished she hadn’t made an exception in my case, and another part of me was grateful she allowed me to have the full experience of that hideous loss. To regain my sight on my own after being blinded by grief and anger and guilt. To rejoin the living after confronting the one death I never dreamed I would have to witness. To slowly – on my terms, at my own pace – surrender into acceptance of what was. Because, really, what is the alternative? Fight it? Deny it? Ignore it? Go into hiding? Change the subject? Look the other way? As long as I continue to live and breathe (and beyond), my son will be dead. What kind of spin can you possibly put on that?

People told me they couldn’t imagine a worse thing happening to a parent. It was horrible enough to lose a child – no matter what the circumstances, but to have one’s child choose to die? What could be worse? At first, I agreed with them. I could not imagine a worse pain either. I ululated my grief to the gods and goddesses and anyone else who could bear the sound of a mother’s mourning. I held myself out to the world as the tragic figure: the lady whose son had killed himself. If anyone had told me to look at the bright side, I would have knocked their lights out. Seriously.

Then, one day, yet another person said those words: “I can’t imagine a worse thing happening to a parent.” And for some reason, rather than automatically nodding in agreement, I heard myself say, “I can.” I was somewhat surprised to hear those words come out of me. “Really?” I thought to myself. “OK, then; let’s see what you’ve got!” I sat down and made a list of the ways it could have been worse:

It wasn’t just a matter of picturing worse scenarios (although that certainly is how the process started). My grieving morphed from a deep abyss of despair into a profound yearning to change my vision, perspective and focus. I wanted to make meaning, to assign significance to this untenable loss of my only child. I couldn’t bear for it to be “for nothing.” Mostly, I wanted to escape this place where I had taken up residence – a limbo-like place between my life and his death. I was barely existing.

It took me a while, but I eventually reached out for Barbara’s glasses. I can’t say whether this was cause or effect. I wore them a little bit at a time every day. My eyes’ muscles – the ones that adjust focus – slowly grew accustomed to this new way of seeing. And I began to recognize that the magic of the glasses wasn’t really magic at all. There was a curious mechanism that allowed them to perform so remarkably: it was a filter of gratitude. As distraught as I was over his death, I was so grateful he had lived. As angry as I was at him for choosing to leave us, I was grateful he was no longer suffering.

Julian’s suicide transported me into an emotional terrain containing toxic levels of heartache not measurable by any man-made devices. In the early days, I thought the anguish would kill me; then I prayed it would. But one does not die from bad news, even though one may want to. As harrowing as it was, I look back on that part of my journey as a gift. The way people sometimes speak of cancer as a gift.

I realize that not everyone is ready for the awesomeness of rose-colored glasses, while others take to them quite naturally.  Barbara, for instance; it’s as if she attracts light, metal to a magnet. It is in her nature to access that rose-colored view. For others, like myself, there is a dark tunnel of pestilence we must apparently squeeze ourselves through to finally reach the light. As if unless we work really hard for it, we couldn’t possibly be worthy. Right?

No! Not right. That’s just a belief that allowed me to punish myself for my son’s suicide. It allowed me to assign blame. The truth is: no matter who is to blame, when a life is lost, it is irretrievable. In my mind, under such circumstances, assigning blame is an extravagant waste of energy. 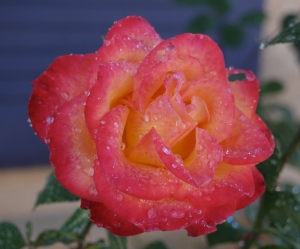 Here’s the final revelation: it has nothing to do with the glasses. It’s about attitude and willingness. I can’t imagine anyone contradicting me if I were to proclaim the right to feel despair. Every morning I wake up and my beloved son is still dead. Every day I spend on this earth for the rest of my life is a day spent without him. I could choose to reside there, in that neighborhood of despair, but it’s like the Bronx of the 70s: rat-infested, garbage-strewn, addict-inhabited. It’s not a neighborhood I’d even want to visit, let alone spend the rest of my life in.

Today I find myself saying things that previously I would have thought were complete bullshit. That bad things don’t happen to us; they happen for us. That pain is inevitable, but suffering is optional. That even the slightest adjustment in perspective can be life-altering, and even life-affirming. That after mind/body/soul-numbing loss, you can’t go back to what was, but you can create a new normal for yourself, and start again from there. That life – if you’re willing to be  with heart wide open and vulnerable – is essentially good. My rose-colored glasses are a badge of courage; they are a survivor’s reward for coming out on the other side.

Years later (older? wiser?), I can put on those rose-colored glasses and see that more awaits, that I am still alive, that I can make it count. It took a while for me to believe this, but now I don’t just see the rose-colored view. I’m a part of that rose-colored scene, choosing to make my way in it.